Locals and tourists agree that a view of long, stunning beaches is not enough to make your trip to the East Coast worthwhile. One must be underwater and experience a close encounter with some of the best marine life in the world. So, grab your wetsuit, make your way to one of these wondrous dive sites and get ready to go scuba diving in Australia!

The East Coast is about 2600km long from Cairns to Sydney. It’s huge! And with so many things to do on Australia’s East Coast, you need more than a month to explore it fully. But worry not if you don’t have that much time. I’ve narrowed down your options to a few top diving sites in the area to start your deep-sea adventure. An exhilarating dive into one of these locations will have you planning your next trip back to the coastline for sure.

Hailed as one of the best diving spots in Australia and the world, the SS Yongala shipwreck dive features the 110m steamer that capsized in March 1911. The sea tragedy took all its 122 passengers, and it was only 40 years later when a research group located the lost ship at Cape Bowling Green. The ship was remarkably intact even after many years of being underwater.

Now, it’s coral encrusted and teeming with massive marine life, including bull sharks, barracuda, sea snakes, eels, eagle rays, turtles and pelagic fish. The wreck is protected, and divers are not allowed to touch or penetrate it. The strong currents can affect visibility as well, making it more suitable for advanced divers.

Julian Rocks is a protected nature reserve made up of two small islands. The site is only a 10-minute boat ride away (about 2.5km) from Byron Bay. Named as the mini Galápagos by the Lonely Planet, Julian Rocks was a product of a volcanic eruption a million years ago. Now, it’s one of the famous spots for scuba diving in Australia.

Here, warm waters combine with cold temperate currents, making it an ideal home for both tropical and cold-water marine life – about a thousand species of them to be exact! It’s a rewarding dive with excellent visibility. Divers also get a seasonal treat with sightings of leopard sharks and manta rays from summer to autumn, and endangered grey nurse sharks in winter. 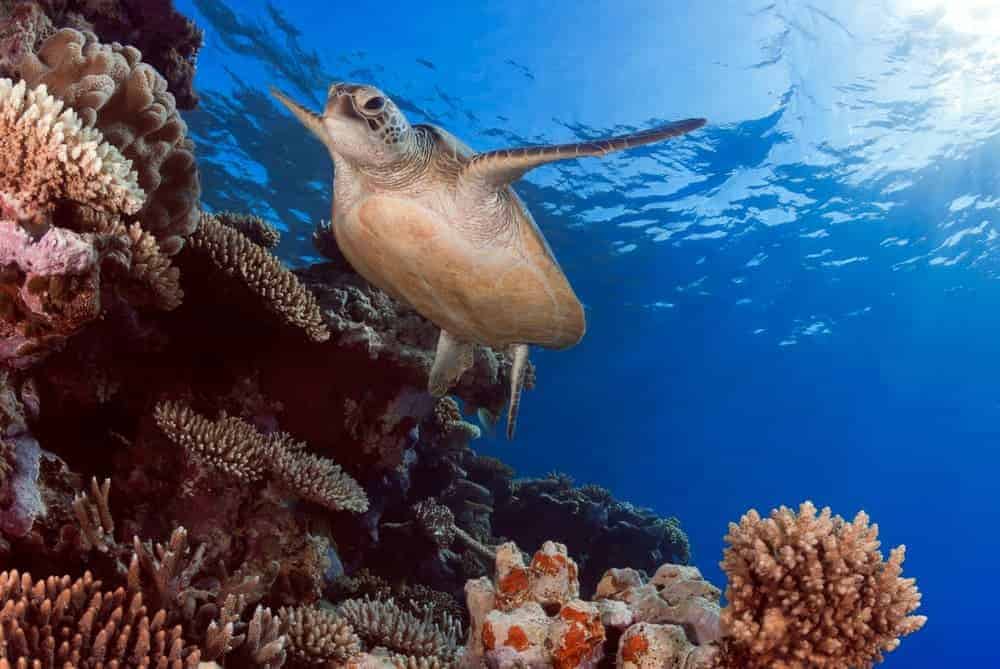 About 350km north of Cairns is the Osprey Reef, the northernmost region of the Great Barrier Reef. It’s further offshore, but this makes the waters rich and pure, treating divers to glass-like visibility.

There are several diving spots in the area, but for a dive to remember, make sure to give North Horn a visit. Home to a vast population of whitetip sharks, this spot has been a shark feeding site for years. About 20m below, there’s also an underwater amphitheatre where you can sit back and relax while watching these majestic creatures feed. While taking in this out-of-this-world experience, keep your eyes peeled for more macro marine life like hammerheads, pelagic octopus and dogtooth tuna.

Deep into the cave, you’ll see plenty of subtropical and tropical marine species. You’ll be busy catching glimpses of turtles, nudibranchs, eels and rays swimming by. The site also features two bubble caves where divers can take their masks and regulators off for a brief conversation. But it’s the grey nurse sharks that make Fish Rock popular among divers. These critically endangered sharks feed, mate and give birth in the site all year. Hammerheads are also at times spotted here.

For exceptional scuba diving in Australia, Lizard Island is the place to be. Secluded and surrounded with powdery white sandy beaches, this site is sought-after for its exclusive resorts and diving spots. Even before you reach your destination, visitors already get a stunning view of the Great Barrier Reef while on a 50-minute charter flight to the island from Cairns.

One of its popular diving locations is the Cod Hole. Here, you get to be greeted by potato cods that weigh up to 100kg! Though humongous, they are very friendly and excited about the food you’ve brought them. Aside from the Cod Hole, you can also visit the Yonge Reef for drift diving and the Big Softy to swim with reef sharks and manta rays.

Follow Me
Nick Durant
An Adventurer at Venture Thrill
I am Nicholas. I blog on Venture Thrill to record my interests in travel and adventure. I also hope to share some of my favourite tools and devices I use on my adventures to the like-minded.