With the country’s scenic landscapes, New Zealand is in every outdoor enthusiast’s (and Tolkien fan’s) travel goals. But did you know that tourists flock here to see its blue oceans and vast marine life, too? It may lack tropical coral reefs and warm waters, but that won’t stop eager snorkellers from experiencing its numerous marine reserves first-hand. Time to update your vacation plans and add these best places for snorkelling in New Zealand!

Best Time to be Snorkelling in New Zealand

If it’s your first time to visit New Zealand’s snorkelling and diving spots, December and January are the best time to go. However, it also depends on what island you’re going to and its ever-changing sea temperature. For instance, North Island seas are at 21C during summer and 15C in winter. South Island’s waters are colder, though, which is at 18C in summer or a chilling 8C during wintertime.

No matter your travel plans, make it a point to check the weather. You can bring your snorkelling gear with you or hire one. Make sure to get your medical check-up, follow your trainers, ask questions and always stay calm. Check out this tourism guide, too, for more safety tips.

New Zealand may be known for its beautiful hiking trails. But it is also surrounded by three oceans and boasts more than 15,000km of coastline. So, it’s no surprise that it’s a hub for some of the best snorkelling sites in the world. What’s more is that most of them are offshore, making them very accessible and inexpensive to visit. This trimmed-down list should make choosing a little less overwhelming.

A trip to Auckland is not complete without making a stop to its most popular and the country’s oldest underwater reserve: Goat Island. Also known as Cape Rodney or Okakari Point Marine Reserve, the site is a favourite snorkelling spot. Here, visitors can enjoy swimming with stingrays, jack mackerel, kahawai, kingfish and mackerel. Keep your eyes peeled for occasional sightings of seals and dolphins, too. The stars of the reserve, however, are huge snappers Monkey Face and Charlie Lip. And if you’re travelling with kids, Goat Island has shallow inshore areas – a perfect spot for snorkelling beginners. Other fun water activities in this beautiful marine reserve include scuba diving and clear kayaking.

Snorkel and coastal walk in one: Cathedral Cove

Also known as Te Whanganui-A-Hei Marine Reserve, Cathedral Cove is yet another top site for snorkelling in New Zealand. It’s in the Coromandel Peninsula, about 2 hours away from Auckland, and accessible by boat or car. If you’re looking for a less crowded spot to unwind, this is the place to be. It gets even better when you choose to reach the cove on foot for a scenic walk along picturesque Hahei Beach. A picture of you with its natural archway is IG-worthy, too! Gemstone Bay is Cathedral Cove’s main attraction, where snorkellers get to see rock lobsters, snappers and colourful coral formations up close. Here, marker buoys indicate the marine life thriving in specific areas. 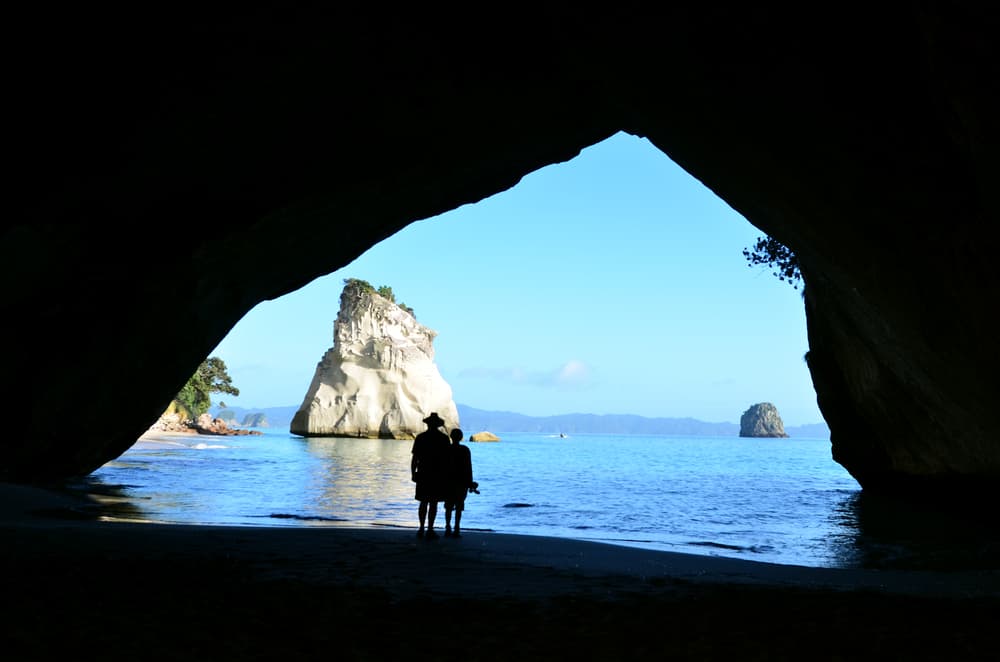 Hailed by ocean explorer Jacques Cousteau as one of the world’s best dive sites, the Poor Knights Island Reserve is also a snorkelling hotspot. It’s in Tutukaka, about 30-minutes northeast of Whangarei, and well-known for its stunning kelp forest and gorgonian coral gardens. This snorkelling spot is also best for beginners to see stingrays, eels, urchins, anemones and dolphins. Swim with schools of Blue Mao Mao when you snorkel through the Blue Mao Mao Arch. The best part of your adventure is the Riko Riko Cave – Southern hemisphere’s largest sea cave. It’s great for swimming and echo singing, too!

If you want to make the most of your water adventure, then head to South Wellington and visit the Taputeranga Marine Reserve. This site is one of the best for snorkelling in New Zealand due to its top-notch marine biodiversity. Over 180 species of fish live here, including octopus, starfish, rock lobsters and crabs. Anemones, sea sponges and sea squirts are also common.

Plants are just as diverse, with 400 species of seaweed recorded and kelp plants growing up to 20m tall. To see as many species as possible, make sure to complete the Island Bay Snorkel Trail at full tide. After that, visit the Island Bay Marine Discovery Centre, which houses one of the largest collections of marine life in the country.

Visitors get the best of both worlds while at the Tonga Island Marine Reserve: a snorkelling site and spectacular sandy beaches. It runs along Abel Tasman National Park, after all – one of New Zealand’s well-known national parks. The great weather, intimate coves, sheltered bays and golden-brown sand of the area are perfect for your little “me” time. When it’s time to snorkel, head over to Foul Point and Tonga Quarry. These spots are famous for viewing rocks coated with pink algae or rhodoliths. The attractive rock beds serve as the feeding site for several invertebrates. You’ll see kina and turban shells here as well as inshore fish like snapper, blue cod, wrasse, tarakihi and moki. Apart from snorkelling, the reserve is ideal for diving, kayaking, rock-pooling and picnicking, too.

Follow Me
Nick Durant
An Adventurer at Venture Thrill
I am Nicholas. I blog on Venture Thrill to record my interests in travel and adventure. I also hope to share some of my favourite tools and devices I use on my adventures to the like-minded.